The British music-tech startup Roli has filed for administration and will reboot as a spinout called Luminary after the twin difficulties of a niche target market and a pandemic forced a reset. Some Roli products will live on through Luminary, set up by Roli founder and CEO Roland Lamb and Chief People Officer Corey Harrow.
The new entity has acquired Roli’s intellectual property and assets and will take on its venture debt, provided by TriplePoint Capital. Roli’s about 70 employees will shift to the new business, which closed £5 million ($6.85 million) in initial funding led by the early-stage investor Hoxton Ventures, also a backer of the food-delivery firm Deliveroo and security firm Darktrace.
Roli had raised $75.7 million from individuals and institutional investors, some of whom will lose their money as a result of the administration. Roli was founded in 2009 by Lamb, who holds a Ph.D. in product design from London’s Royal College of Art.Lamb set out to invent musical instruments, coming up with the Seaboard, described by Insider in 2016 as “a piano you would find on an alien spaceship,” It blends something of the traditional clavier with the flexibility of a computer.
The Seaboard was a hit with hobbyists, and Roli drew famous fans and collaborators such as Hans Zimmer, Grimes, and Pharrell. Both Grimes and Pharrell invested in Roli, with Pharrell acting as chief creative officer between 2017 and 2019. The startup followed with Blocks, a modular system that allowed users to plug different Roli components together. In 2019, it launched Lumi Keys, a light-up electronic piano targeted at beginners. But even as its devices won plaudits, Roli’s hurdle was that its products appealed to professional musicians and tinkerers — too niche a market for the revenue growth and valuations typically associated with venture-backed startups.
“Ultimately, what happened was the pro-focused products we initially developed, although successful within their marketplace, the marketplace wasn’t big enough given our venture trajectory,” Lamb told Insider on Wednesday. “We had our eyes set on hypergrowth, and that proved to be difficult.”
In Roli’s most recent financial filings, covering the 18 months to June 30, 2019, the startup reported pretax losses of £34.1 million on revenues of £11.4 million. High costs were attributed to staff salaries, senior hires, and the manufacturing of the Lumi and Roli’s other hardware. Hardware accounted for 82% of Roli’s revenue over the period, versus 18% from software. The filings showed the firm shored up its reserves by selling off two software-oriented parts of its business in 2020 and raising more debt.
It had also become clear from the declining fortunes of the fitness band firm Fitbit, the camera firm GoPro, and the smart-thermostat company Nest that businesses focused solely on consumer hardware needed to retrench.
“Quite a lot of venture money was flowing into hardware startups, but around 2016, that market dynamic really changed,” Lamb said. “It became clear that the model that would succeed was more of a subscription/services-based model where hardware was an important component.”
To that end, Luminary wants to be the “Peloton for piano” and will focus on helping beginners learn to read and play music through the Lumi keyboard and accompanying app. Learners, Lamb said, will be a bigger target market than the pros who bought the Seaboard.
It won’t necessarily be an easy sell, given that the keyboard costs $300, plus $80 for a yearly app subscription (though a basic free tier is available). By comparison, a secondhand full-size digital keyboard starts at about $350 on eBay. Elsewhere, Luminary will reintroduce the Seaboard, which has been out of stock as the company plans its future. The reset brought some “dark nights of the soul” for Lamb, he said, though he is optimistic Luminary can achieve bigger growth than Roli. He said placing Roli into administration and starting anew allowed the team to shed legacy processes from the original 10-year-old business.
“I’ve learned a lot about how to operate in new ways that are better” and how to be more vulnerable, he said, adding: “So I’m excited about this next stage.” Given Roli’s struggles to meet hypergrowth expectations, does taking venture capital make sense for Luminary? Lamb thinks it does, at least this time around. “When you’ve got venture dollars, you want to go after the biggest addressable market, and that’s beginners,” he said.
Hussein Kanji, a partner at Hoxton Ventures, said in a statement: “It is incredibly hard to self-teach music, especially for kids. Existing products and Zoom lessons don’t satisfy consumer needs or the learner’s potential. “Lumi has the potential to make music education much more accessible to students around the globe.”
Hier geht es zur Roli-Website 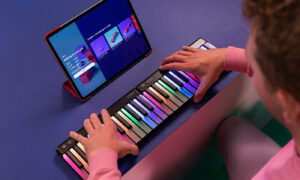